To help you see the ideas outlined in Get Started we created a hypothetical organisation – The Surf Centre – to go through each step of the proving and improving process with you. This example is based directly on the learning and experience of the social enterprises across the Social Enterprise Partnership Quality and Impact Project.

The Surf Centre began three years ago as a community project run by local young people who wanted to set up an Internet café. They received a donation of ten computer terminals from a large computer company based in the area. They took over an unused office on the local housing estate owned by the Council. The group applied for start-up funding and received a £10,000 grant from a foundation for their first year of operations. The grant enabled them to connect the terminals to a local Internet Service Provider, buy new software, refurbish the space, advertise, and enable the five founding members to undergo a train-the trainer programme on how to teach people basic computer skills.

A window of opportunity emerges

By year three, the Surf Centre hires a full-time person who could also operate the café during the day and offer some training. They are able to do this based on saving the profits earned over the first two years. A window of opportunity emerges.

The five founding members realise now that initial financial sustainability has been achieved, they would like to expand their services to have a greater impact on the local community. They decide they want to offer computer-training services to local women as part of a package of support to help them enter the workforce.

The Surf Centre team has been approached by a local partnership of training providers to offer this service. They decide to link the ideas of proving and improving into their thinking in order to:

• Learn ways to show investors they have succeeded in the past to boost their credibility and justify their entry into this new service.
• Be confident themselves that they know how they achieved their success and what the key components are so they can be sure to replicate this success in their new venture.
• Better understand the knock-on effects of their work locally.
• Create a space to be proactive rather than reactive. They don’t want to just respond to the idea presented by the training partnership. The team wants to use this as an opportunity to think about their future direction and reflect upon their early success. The team needs a framework to facilitate this decision-making.

• Is creating this new venture in line with the Surf Centre’s core values?
• If they began as a youth organisation and now ownership and management is changing to fulfil a broader set of goals for social change, is this ‘good’ or ‘bad’? How do they know?

In the first two years, the Surf Centre operated the café during non-school hours – during weekday evenings from 4:30 pm to 7:30 pm, and from 11 am to 4 pm on Saturdays and Sundays. They charge users £2 an hour, which means that if they operate at maximum capacity, they earn £20 an hour, for three hours a day, five days a week for a total of £300. Plus they can bring in an additional £200 for their ten hours of weekend operations. This means their maximum weekly earnings could be £500, for a total of £2250 a month (based on a 4.5 week month). Their outgoings for a typical month are:

The Surf Centre has been presented with an opportunity to expand services to a new client group. The team wants to know how successful they were over the first couple of years and which activities they will need to repeat in their new venture. The five founding members decide to hold an afternoon brainstorming meeting to discuss what they want to get out of the process, who will be in charge, and what resources they will use. Whilst they don’t have any extra money to spend on this decision-making process, they commit to spending three hours a week together until they make a decision.

At the Surf Centre’s afternoon meeting, the first thing the team realises is that the group has never formally written down their mission statement before. They all have similar but slightly different language they use to describe their work. Although it takes a little over two hours to agree the final wording, they feel they have achieved something. They also discuss what their values are, and what they want to achieve. This helps the team clarify what they don’t want to do, and what is most important to them.

It is at this point they realise they are all willing to move beyond their original youth focus and that what really drives them is the desire to get as many different types of people as possible who have not used the Internet before to get online.

To identify their stakeholders, the Surf Centre team makes a list of who are important to them and chart where different groups live on a local map. They also brainstorm a list of organisations they are involved with – from those they contact for information through to those that represent them at the regional level.

To clarify the Surf Centre’s theories of change, the group decide to use the NEF Impact Map. This helps them to think through some indicators that they will use to know that they are marketing the business successfully, and some indicators to capture how change is taking place for people living on the housing estate. They really want to know how their financial sustainability has improved and whether or not the rest of the community has changed as a result of the café’s activities.

The team looks at its Impact Map, to figure out the most important things it needs to know are happening… its signs of success. One team member also looks at the Proving and Improving Toolkit’s indicators bank to learn more about what an indicator is and what it is supposed to do. They want to know whether people have learned to use the Internet to help them with the things they want to be able to do and who their clients are. The Indicators Bank gives them a sense of what other organisations measure and they find a few ways of asking people about their skills development and well-being from the social indicators section to include in what they ask their clients. They also decide that an indicator of their financial performance towards their goals could be profitability – looking at surplus earned at the end of each year of operations.

The Surf Centre team looks at the chart in the Toolkit and weighs the benefits and limitations of using different approaches to collecting information. The group decides that although they could use computerised surveys, they want to do a paper-based questionnaire so that they can easily talk through it with people and get the responses of those who aren’t yet comfortable online.

The Surf Centre decides that it would like to get lots of information from different people to help it learn about the effects it has had. They team decide to do a paper survey. In their first meeting to talk about the survey, they learn first-hand that people can get too excited about asking all kinds of things at once – when they brainstorm the questions for the survey they realise that they have way too many and no one would want to fill it out! So they revise the questions and make sure that each one relates to their mission, their objectives and their values – the key indicators of their success in each area. They decide to only ask what is most important to measure at the time and to use information they have already collected to supplement the answers. They also decide to talk face-to-face with the people that come to the café and some who don’t normally show up by putting on two social events in the Centre. The team holds one event on a weeknight, mainly geared to young people, to ask clients what they think about the service, and they then hold a similar social event on a Saturday, for adults, parents, and older people, to ask informally again what their clients or potential clients think of the service. They make and distribute the questionnaire, collect and review the responses, and meet as a group to discuss it afterwards to see patterns.

One member of the team volunteers to create a ‘master survey’ which lists each question and all the answers they have received to that question. When they meet as a group to discuss what they have learnt, they find out that elderly women don’t come to either of the social events, that they are reaching the young people, but this is mainly younger teens from 11–14, and not 15 and upwards. They also learn that they are doing a great job of helping people to use email, but will need to improve their training and support to help people access job adverts more effectively. They then draw some conclusions about what to do better – thinking through whether or not they should focus on one client group rather than expand services.

The Surf Centre team puts up a poster with the results of the survey in the Internet Café to share their findings with everyone. This gets people talking about ways to get more people using the café and gives a space for people who haven’t been part of the survey to express their opinions.

Beneath the poster, they write a summary of what they are going to do as a result of the feedback they have had and when the changes will come into effect. They also speak to some of the elderly women on the estate to find out what the Surf Centre will need to offer to be able to get this particular client group in the door. They then draft a forward plan that includes more resources to open at times convenient to the older ladies, and some plans to increase training on finding and applying for jobs online.

Going through a clear set of steps to help them think through how they could improve their organisation and start proving their impacts is easier than they thought, and could be made to fit their own needs. By taking the time to meet and discuss their values and objectives outside of normal activity, they are able to design measures and collect information that helps them plan for future work. It also motivates them and helps them reconnect with and feel good about their efforts. 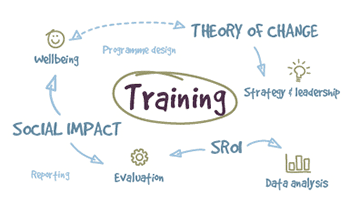