MAYDAY TRUST: A NEW WAY TO RESPOND TO HOMELESSNESS

Home MAYDAY TRUST: A NEW WAY TO RESPOND TO HOMELESSNESS

An evaluation of the Person-Led, Strength Based Response (PTS) service

Research conducted by NEF Consulting for the Mayday Trust evaluates a new way to respond to those facing homelessness, evidencing the need for a sector wide shift.

Mayday Trust developed the Person-Led, Transitional and Strength Based (PTS) Response following a transformation of services. It provides PTS Coaches to walk alongside people going through the toughest of times, creating an environment where people have choice and control over their lives and can move forward to the future they want.

NEF Consulting conducted a two-year evaluation of the Person-Led, Transitional and Strength Based (PTS) Response delivered by two organisations working in the homelessness sector, Mayday Trust in Northampton and its partner Changing Lives in Newcastle. The PTS brings together an asset-based approach and advantaged thinking to work with people transitioning out of homelessness and other difficult life transitions. The PTS response is delivered differently by the two partners.

The report shows that those accessing the PTS value the service, however learning is still ongoing as many of the respondents to interviews reported barriers such as dealing with the local authority in accessing funding or a home; lack of safe housing; and the pandemic, which also played a part in putting people’s aspirations on hold. The wider systemic culture around the housing sector may also be undermining the PTS Coaches’ outcomes for the individuals.

Despite much of the research being conducted during COVID 19 restrictions respondents working with a PTS coach reported an increase in self-esteem, sense of purpose, and optimism. People also reported better mental health including feeling happier, and a reduction in anxiety.

Respondents reported that the coaching relationship established trust through listening and the time invested in getting to know them was highlighted as the most important aspect of the support in terms of providing timely support and achieving outcomes. Where a person-led approach was also taken when deciding when and how to end a coaching relationship, evidence showed this increased the chance of positive outcomes being more sustainable.

NEF Consulting led a co-design session with Mayday Trust to clarify the research questions, refine the Theory of Change, and scope the evaluation methodologies. Identifying key outcomes, we developed a survey to measure changes in those outcomes. In-depth individual interviews were complemented by an analysis of the quantitative data collected internally by the PTS.

The evaluation was conducted during the Covid pandemic, significantly disrupting the PTS coaching relationship.

Setting own aspirations
Respondents reported being able to identify and work on a wide range of aspirations they had identified as mattering to them. The aspirations ranged from practical actions, such as sorting out debt; to social achievements, particularly repairing relationships.

Wellbeing: self-esteem, purpose, and confidence
By the time the coaching relationship ended, respondents reported an increase in self-esteem, sense of purpose, and optimism. People also reported better mental health including feeling happier, and a reduction in anxiety since working with their Coach. They achieved a wide range of wellbeing outcomes identified in the Theory of Change.

On average, findings showed an increase in WEMWBS score by 2.5 units for Mayday Trust and 2.6 units for Changing Lives. This is equivalent to an increase of 5.6% and 5.7%, respectively. These final scores show improvement in mental wellbeing for individuals and represent the average mental wellbeing in WEMWBS, which ranges from 45 to 59.

Not all those working with a PTS Coach experienced improved mental health. People who reported negative outcomes on mental health attributed it to not having access to structured support, such as a PTS Coach. Lockdown restrictions contributed towards increased isolation and increased vulnerability.

As a result of achieving positive wellbeing outcomes, respondents reported being able to change how they respond to difficult circumstances, and how they communicate and articulate their feelings to others. They were able to identify problems early on and actively seek help.

Social connections and positive networks
The findings suggest respondents did not have very strong positive social networks outside the coaching relationship.

Organisational culture and access to safe housing
The wider supported housing sector can treat people experiencing homelessness as a homogenous group. The evaluation found that a lack of consideration of the specific strengths and needs of individuals led to people being placed in unsuitable, and potentially unsafe situations, negatively affecting mental health.

One of the key principles of the PTS approach is to involve the person’s wider social network, or build positive networks for the person. However, respondents described difficulty enjoying meaningful relationships due to the location of their accommodation.

Positive outcomes in wellbeing and mental health, in the most part, have been sustained post-PTS, alongside an increase in motivation and changes in behaviour, and the ability to identify aspirations. However, some respondents may find it difficult to continue to achieve aspirations without a Coach.

The pandemic created significant disruption to the way the PTS worked, which may have led to an inconsistent method of working among the Coaches. For some individuals, the ending of the coaching relationship may have presented some challenges.

The evaluation identified two key challenges that risk undermining the positive outcomes experienced by respondents, both amplified by the pandemic: 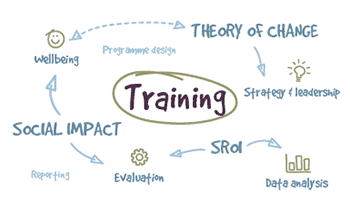